Web Application Penetration Testing: Why You Need It & Where to Start

You’ve seen the headlines — Hackers Attempt an Attack Every 39 Seconds. You’ve may have read so many articles on cybersecurity that the statistics blur together. Yet, you’re still struggling to decide the best approach to secure your web applications. Have you considered web application penetration testing? It is an effective method for keeping your applications secure as they mature.

What is Web Application Penetration Testing?

A web application penetration test is a simulated cyberattack against your computer system. Also known as a pen test, this testing checks for vulnerabilities that can be exploited to gain access to your system. A pen test is designed to:

Using pen tests lets you see how your system behaves in a real-time environment.

Why Do Penetration Testing?

Web application pen testing can identify vulnerable routes through your infrastructure. It can locate loopholes in applications that leave sensitive data open to attack. It can even help strengthen your security policies by highlighting areas that need improvement.

Companies need up-to-date security procedures. Some processes are related to password management and user authentication. Others include how to respond to a security incident. Policies need to be in place for the identification and escalation of possible threats. Deciding what to do in the middle of an attack only adds to the chaos and increases the chance of error.

Your public-facing infrastructure such as firewalls, routers and DNS servers are not static. Changes are made to accommodate new connections or to adjust traffic filters. Sometimes these changes are made in isolation, which can increase the likelihood of an unintended breach. It’s essential to test your infrastructure to avoid possible vulnerabilities.

Using appropriate test methods, a pen test can help identify delays in application load and response times. Evaluating performance across all browsers and at different traffic volumes enables staff to make adjustments in the application or the infrastructure to improve performance. There’s nothing worse than having your site load slowly or your home page display differently in IE and Chrome.

Depending on your business, you may have compliance requirements that include pen testing. For example, storing financial or sensitive personal information requires compliance with PCI_DSS. Organizations that participate in power grids must comply with NERC standards, which include penetration testing.

Web application pen testing can do more for your organization than meet compliance requirements. It can help improve the overall performance of your applications and your infrastructure.

How is Pen Testing Performed?

As a first step, a test methodology should be established for how the testing will be performed. Some well-established methods and standards, such as the following, can be used.

Since web applications can vary significantly, most testers create their own methodologies using the applicable standards as the basis.

Before testing, define the project’s scope and goals. What are the objectives of the pen test? Compliance? Performance checks? Whatever the goal, you’ll need tests that deliver those results. Once you have your goals in place, start collecting information that will be used during testing such as

Often a vulnerability assessment is completed as a precursor to penetration testing.

Typical tests include attacks to gain access to the application, such as backdoors or SQL injection. If a vulnerability is uncovered, testers will exploit the weaknesses by capturing data or intercepting traffic to understand the damage the vulnerability may cause. Advanced persistent threats remain in a system for months extracting sensitive information for malicious use.

The types and numbers of tests are extensive. That’s why it is necessary to define the scope and goals of the project.

After the tests are complete, review the results with all concerned personnel. They need to analyze:

From this information, vulnerabilities can be addressed and retested. Any settings or configuration changes should be implemented to prevent unauthorized access.

No matter the specific penetration testing, the following best practices should be observed:

Making sense of all the requirements for web application penetration testing can be overwhelming, especially if you don’t have a dedicated cybersecurity specialist. Luckily GreyCastle Security is here to help! We will help you design the best defense against cybercrime. Learn more about our penetration testing services and request a consultation for your business today! 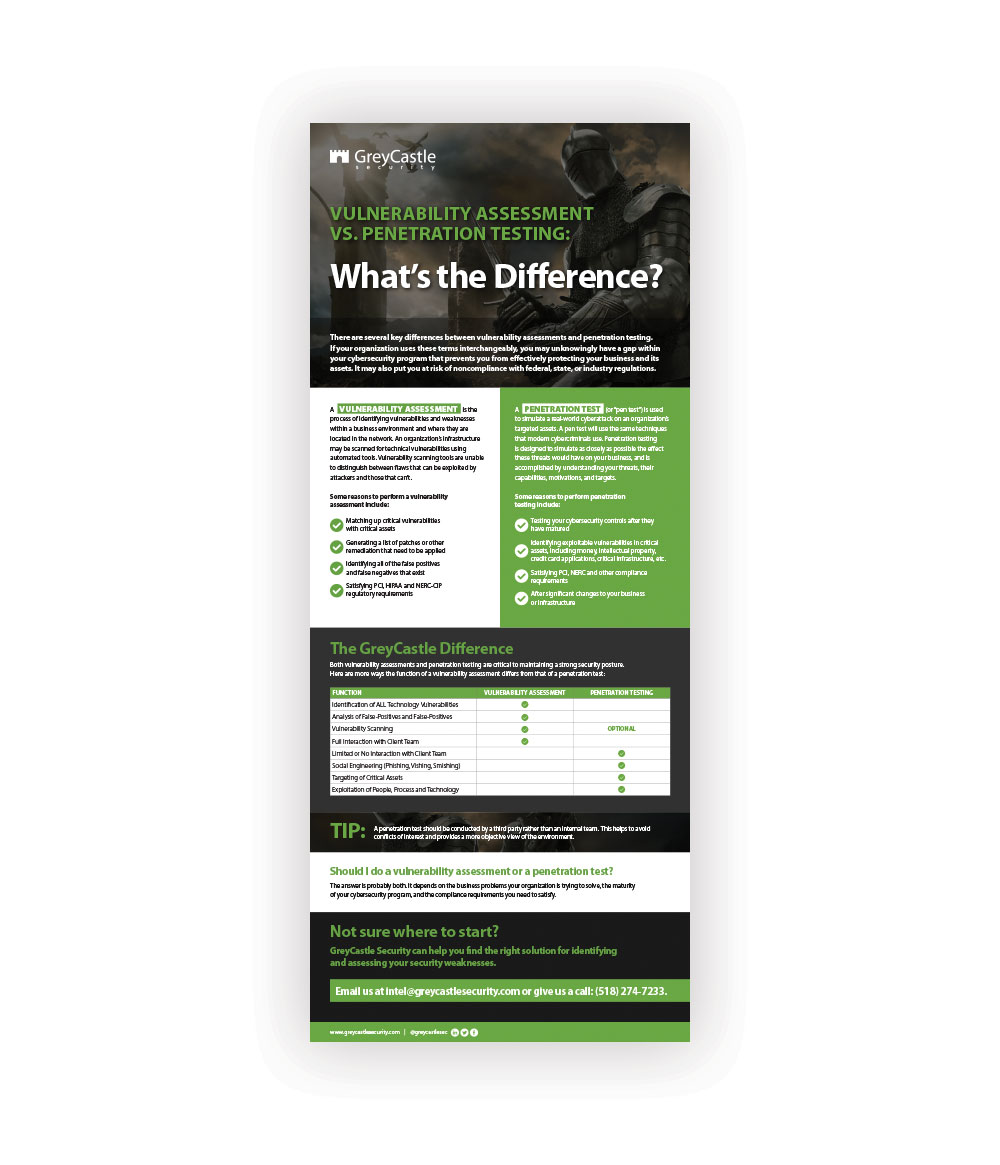 There are several key differences between a vulnerability assessment and a penetration test – and not understanding those distinctions could impact the effectiveness of your cybersecurity program.

Cybersecurity Predictions & Trends for 2023: Your Year of Readiness
Watch Now

Cybersecurity Predictions and Trends for 2022: Your Year Of Readiness
Listen Now

Are you experiencing a cybersecurity incident?