IBM Security, in partnership with Ponemon Institute, released their 17th annual Cost of a Data Breach Report. The report uncovered the global average cost of a data breach has reached an all-time high, $4.35 million.

2022’s average cost of a data breach of $4.35 million represents a 2.6% increase from $4.24 million in 2021 and an average cost increase of 12.7% from $3.86 million over the last two years. Some factors impacting the increase are the frequency and complexity of attacks as well as the after-effects of breaches which linger long after the initial breach occurs. Nearly 50% of breach costs are incurred more than a year after the incident.

Another finding noted in this report is 60% of the organizations studied, raised the price of their products and services in response to a breach.  This coming at a time when the costs of goods and services are already increasing due to inflation and supply chain issues.

According to the report, 83% of organizations studied have experienced more than one data breach, and just 17% stated this was their first data breach. 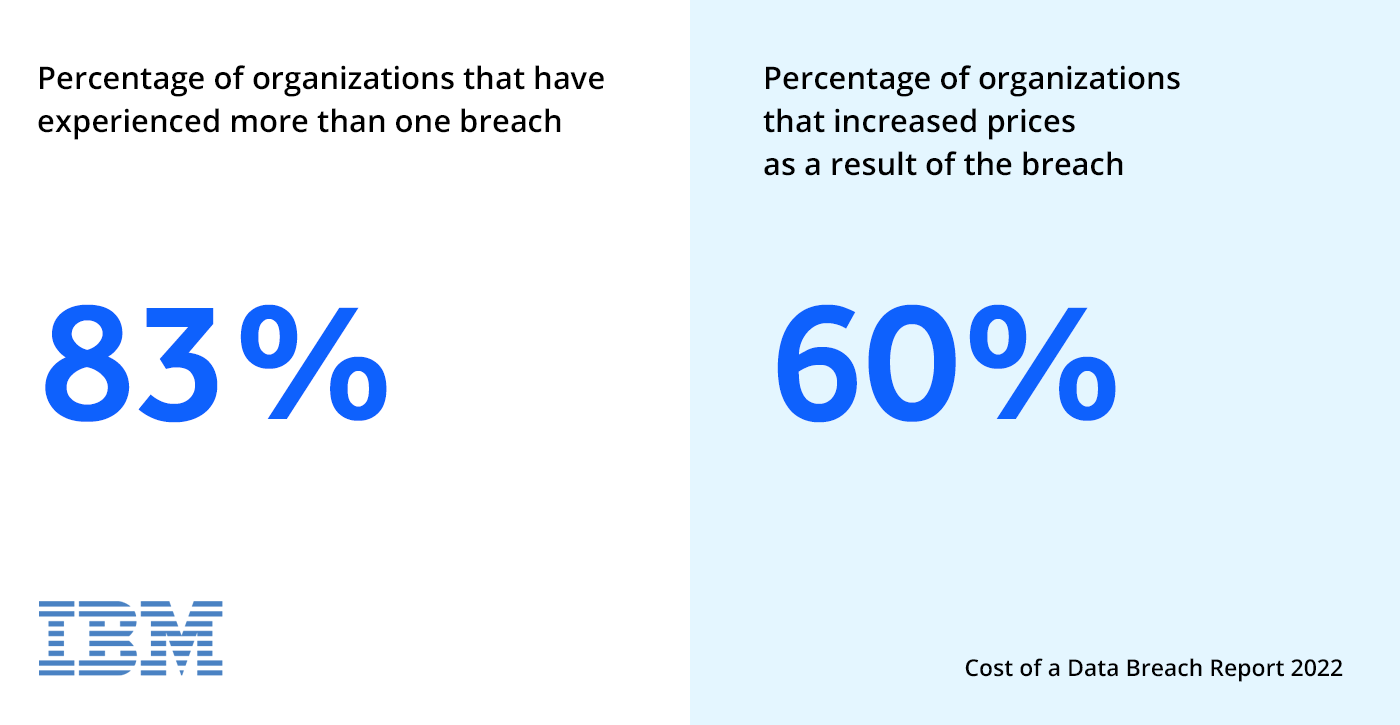 Having either an in-house or outsourced Incident Response team with a regularly tested incident response plan continued to mitigate data breach costs in 2022. The average cost savings in organizations with a team and a plan vs. those without was $2.66 million. 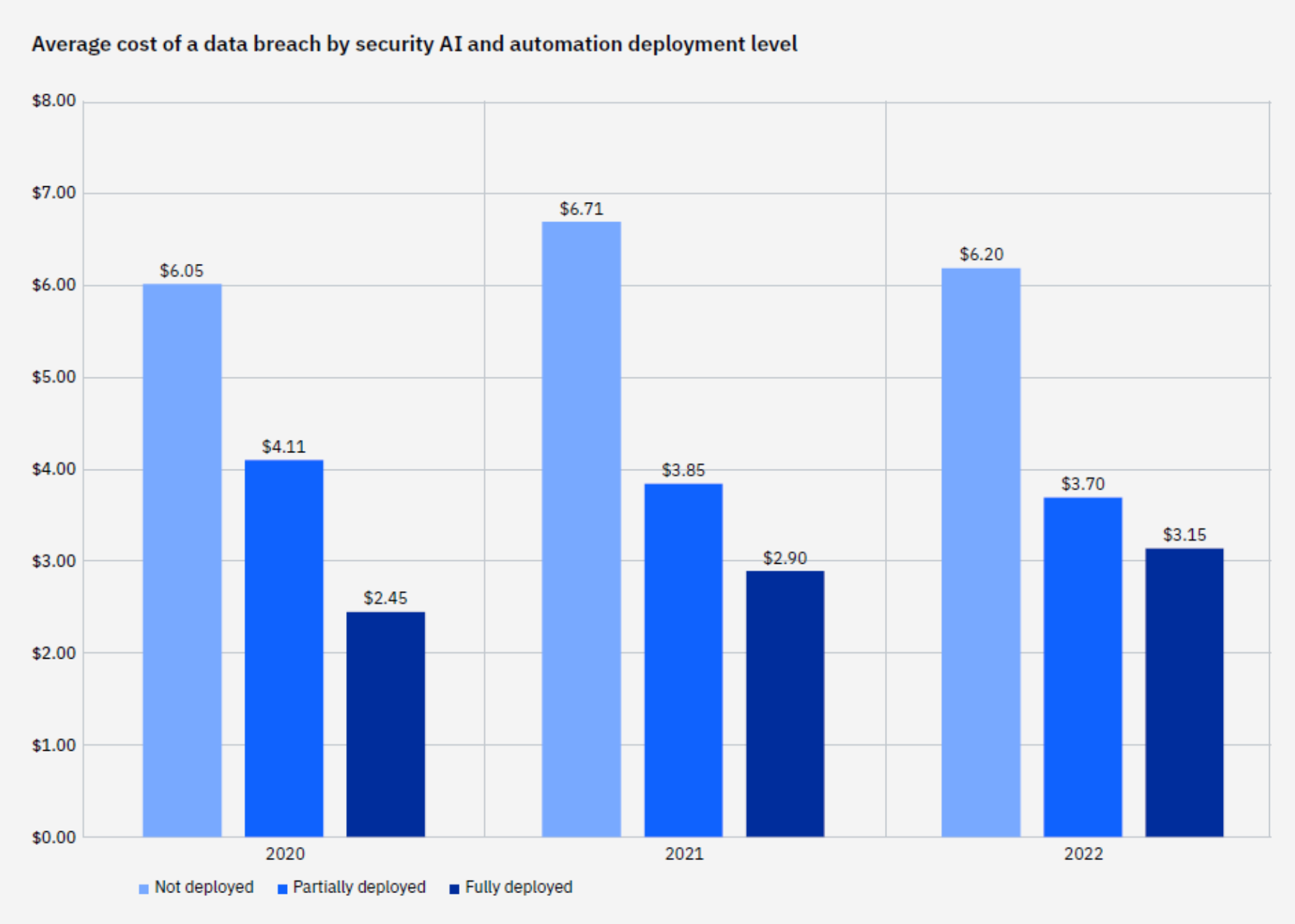 The Cost of Remote Work

45% of the breaches in the study occurred in the cloud. Although the average cost of a data breach in hybrid environments cost less than both isolated public and private cloud environments, 43% of organizations studied are in early stages or have not started applying security best-practices across their cloud environments.

A really insightful part of this year’s report are the identified key cost factors. This year, IBM Security looked at 28 factors that influence the cost of a data breach. IBM Security included identity & access management (IAM), XDR technologies, multi-factor authentication (MFA), and crisis management teams for the first time in this report.

The chart below shows the average cost difference of breaches at organizations who have addressed these cost-influencing factors compared to the mean cost of a data breach of $4.35 million. 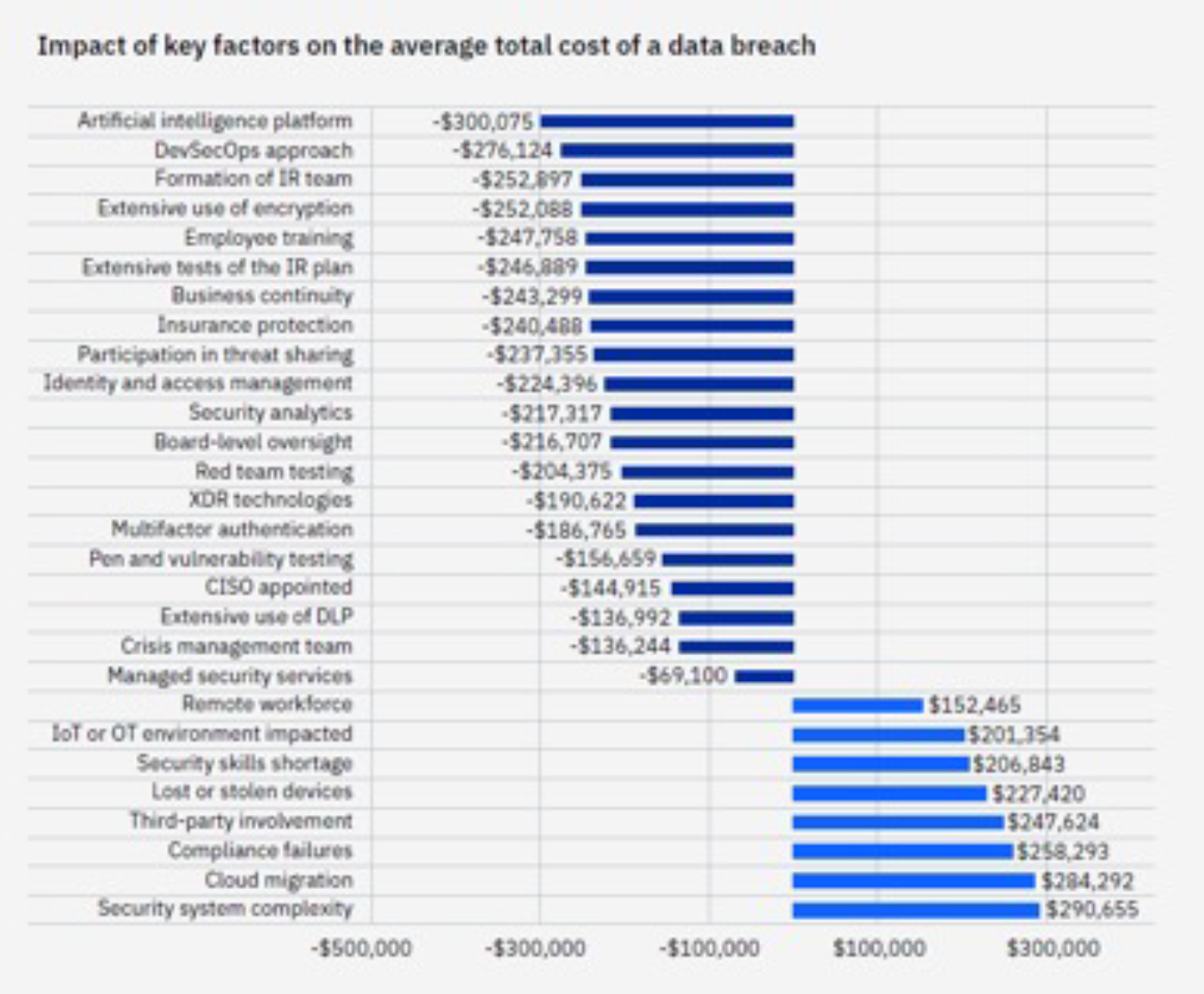 AI platforms, a DevSecOps approach, and use of an incident response team were the three factors associated with the highest cost decrease compared to the average cost of a data breach. The example used in the report show breaches at organizations with AI platforms had an average cost of $300,075 less than the mean cost of a data breach of $4.35 million.

Alternatively, security system complexity, occurrence of cloud migration when the organization is in the process of migrating to the cloud, and compliance failures were the three factors associated with the highest net increase in the average cost.

Cybersecurity Predictions and Trends for 2022: Your Year Of Readiness
Listen Now

Are you experiencing a cybersecurity incident?